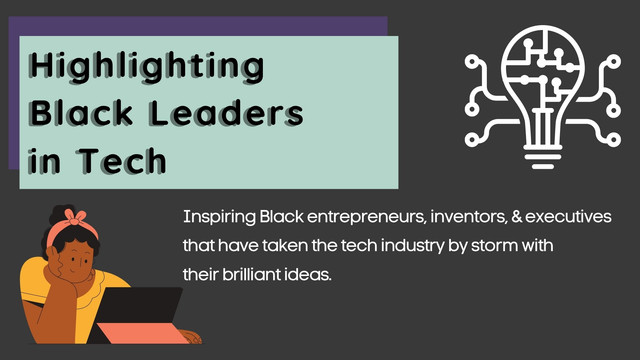 Steve Jobs, Bill Gates, Elon Musk, Jeff Bezos. Historically, the tech industry has been primarily dominated by white men. Within Canada’s tech scene, nearly 70% of workers identify as white, while less than 3% identify as Black. And it’s not just in terms of representation that disparities exist. Black Canadians working in tech on average make over $16,000 less than white workers.

Despite the injustices reflected in demographic makeup and salary, Black entrepreneurs and inventors continue to improve the tech industry with their contributions. From attempts to make tech more equitable for women and people of colour, to ingenious inventions in renewable energy and education, Black tech leaders continue to be change-makers and industry disruptors.

At Lighthouse Labs, we can appreciate disruptors and creative, outside-the-box thinkers. We’re committed to continuing to make tech more accessible through our impact initiatives, scholarships, community outreach, and digital skills training. But it’s going to take more time and effort to transform tech into a truly equitable industry.

For now, we want to extend our appreciation and gratitude to the Black entrepreneurs that improve tech with their leadership, ideas, and initiatives. Here are a few of the many necessary and inventive Black leaders in the tech industry.

Finney has been referred to by Inc Magazine as one of the most influential leaders in tech, and designated as a White House Champion of Change. These nominations don’t come about arbitrarily. Finney has poured much of her innovative efforts into making tech more inclusive and accessible.

Finney created digitalundivided in 2012, an initiative that provides research, programming, and thought leadership supporting Black & Latinx women startup founders and entrepreneurs. Digitalundivided is particularly invested in the industries of tech, retail, health, and software as a service.

The COVID-19 pandemic has had widespread impacts on the economy, accelerating financial divisions on the axes of race and gender. To do her part to help, Finney started The Donnie Fund, encouraging Black women to continue to do entrepreneurial work through micro investments.

Angelides’ journey through the tech industry took the form of a multi-continent adventure. Raised in Nigeria, she went on to study economics in the UK, before transferring to the tech industry in the heart of Silicon Valley. Angelides’ interest in coding started to bloom while she was away from her job on maternity leave. She started to study, but was struck by how inaccessible tech education was to her as a new mother. There, she was an opportunity.

Angelides took her insights and saw a need for tech education courses geared towards mothers. She went on to found Mums in Technology, a child-friendly digital skills training institution for mothers in the UK. With her organization, she set about to challenge assumptions about mothers, tech, and gender.

After the COVID-19 pandemic caused the school to shutter its locations, Angelides moved on to work at the Samos investing company and write for the Financial Times. We’re excited to see what this innovator and change-maker chooses to do next!

Woolley-Wilson is another leader that’s rocked the education sector with technological ingenuity. She’s worked at high-profile companies like LeapFrog and Blackboard, that use technology to improve student learning, experience, and outcomes.

She’s also the CEO of DreamBox Learning, an education initiative designed to find more efficient ways of democratizing education. It’s an online K-8* math program meant to complement existing curriculums that may not serve all students as well as they could. A student struggling to keep up with their math class can use DreamBox to reach their full potential.

DreamBox provides interactive, personalized lessons that close math proficiency gaps. These lessons are meant to help struggling students, give teachers a way of meeting student needs, and build confidence in everyone. Woolley-Wilson’s program is exactly the sort of tech-education initiative that excites us at Lighthouse.

Matthews is a Nigerian-American investor and CEO in tech. Her incredibly innovative creations have sent shockwaves across the world, and inspired new approaches to the concept of renewable energy.

Matthews co-founded the company Uncharted Power, which experience a wave of international fame for creating a soccer ball that can also be used as a power generator. The Sockett stores kinetic energy as it’s used. A half hour of kicking the ball around can generate enough energy to power an LED light for three hours!

After generating excitement with the Sockett, Uncharted Power has gone on to create more renewable energy solutions, especially in the realm of smart urban design. Matthews was named one of Fortune’s 10 most powerful women entrepreneurs in 2011 and an Ambassador for Entrepreneurship by Nigeria’s president.

Bryant was listed by Business Insider as one of the 25 most influential African-Americans in technology. Before launching a career, she studied electrical engineering and computer science. In 2011, she went on to found and serve as CEO for Black Girls CODE.

The non-profit organization’s aim is to introduce Black girls from the ages of 7-17 to tech and computer science. Their central goal? To increase the number of women of colour in the digital industries. Through workshops and after-school programs, they teach these young girls about industries traditionally dominated by white men. Their goal is to train 1 million girls by the year 2040.

Want to learn the skills needed to break into tech and become an industry disruptor yourself?