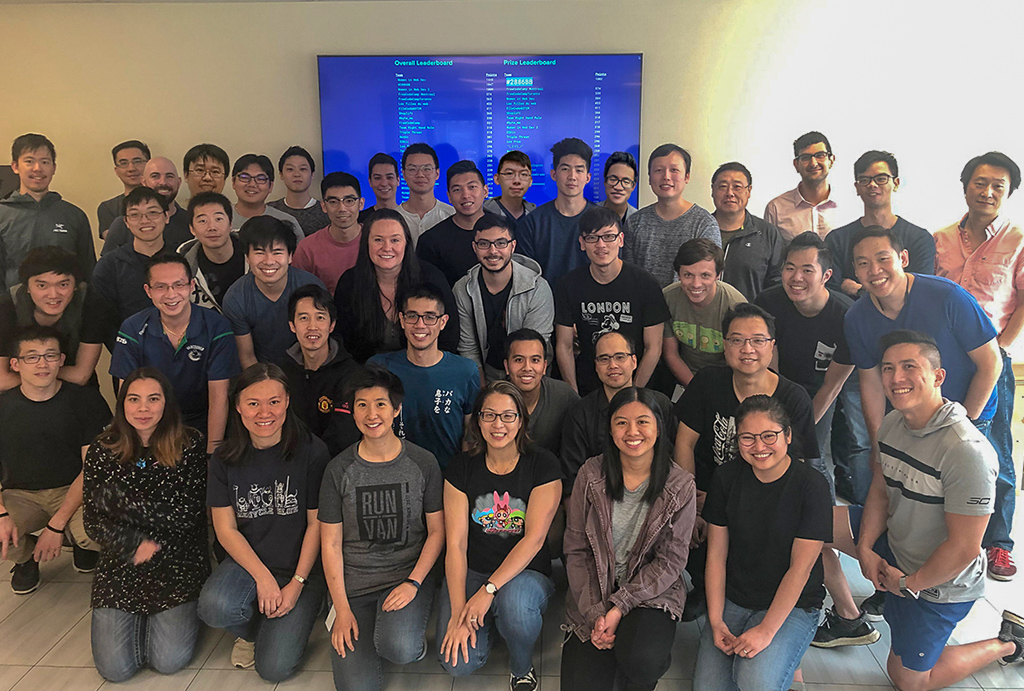 You could say that team #2886BB blue away the competition for the latest 21-Day Coding Challenge.

Team #2886BB took their name from the hex code of the Richmond, B.C.-based Ensemble, where all 50 members are employed. They raised the benchmark for total eligible team points by achieving a final score of 1,002 - the maximum score for a team of 50 members completing all challenges is 1050.

“I'd say we are a competitive bunch overall so it was fairly easy to get everyone to complete the challenge daily.”

At first, #2886BB didn’t start the 21-Day Coding Challenge as a company team, but they soon evolved into one. “I had just asked a few people to join in the beginning and when I had recruited about twenty, I thought we'd have a real chance to win the team prize,” she says. “That's when the competitiveness took over. If you asked my team they would say I coerced everyone into joining.”

The technology solutions consultants company even started an overflow squad, called "Falcon," when they reached the team limit of 50 eligible members. We had a chance to talk to team captain and senior UX designer Jenny Lee, and other team members, about the challenge and the team’s overall experience.

"I thought the challenge was super fun," she says. "I am kind of bummed that it’s over now. My team and I always looked forward to the challenges everyday. Some of us even did it right when it was released at midnight."

People from all departments of Ensemble joined the squad including developers, QA, UX and project managers - some with very little or no experience in JavaScript.

How The Team Recruited More Members

Peer pressure and desk-to-desk marketing proved the most effective strategies to help get the team to 50 and even more on their overflow team. Plus, Jenny sent out an email to the rest of the company to get more members on board, emphasizing the benefits of the challenge. They even had a few Lighthouse Labs graduates on the team.

"Our team really likes big numbers. We really wanted to get to 1000." Caleb adds.

Team #2886BB used Rocket.Chat internally where they had a channel to talk about the daily challenges, help those who were stuck, and to share hints on the different ways of solving each challenge. “I'd say we are a competitive bunch overall so it was fairly easy to get everyone to complete the challenge daily,” team captain Jenny says.

Their Favourite Part Of The 21DCC

"My favourite part was seeing everyone on the team get so excited about the challenge and watch people huddle together to support those new to JS,” team member Wendy says. “I also liked how everyone was [about] sharing solutions in the channel (and that we had a separate channel!) on weekend mornings…so extra. Such dedication."

"The team collaborating on the difficult challenges, as well as the ongoing discussions we've had over alternative solutions was my favourite part," Leo said.

Other teams in the Top 10 included two freeCodeCamp teams, one from Toronto and the other from Montreal, Shopify, and two teams from Women in Web Development. Only the Women in Web Development achieved a higher score this year with 1,448 points, but that includes non-Canadians who weren’t eligible for prizing. In total, 432 teams participated in the 21-Day Coding Challenge.

If you missed the last round of challenges, you're in luck. We have a new 21DCC starting Nov. 1, so sign up now and prepare to code.