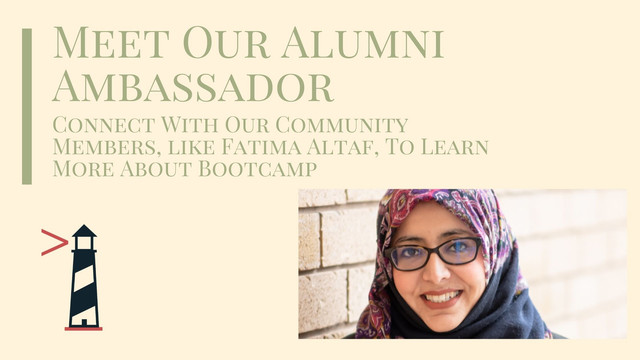 Deciding to enroll in bootcamp can be a difficult decision. It’s a decision that can be truly life-altering, opening up a range of opportunities to you. After you’re trained in digital skills, you’ll be able to benefit from the lucrativeness of the tech industry, or move up in other industries. But it also necessitates a weighty commitment. You’ll want to do your due diligence to understand whether this commitment is right for you. When doing this, you’ll consult blogs and forums, ask acquaintances, and look at course pages.

Today we want to introduce you to one of our alumni community members, Fatima Altaf. People who are interested in learning more about bootcamp can contact Fatima through our alumni ambassador page, and she’ll be able to answer your inquiries and speak to her personal experiences.

Fatima’s journey into tech started from a very different place. Just a few years ago in 2017, Fatima started working in the nonprofit sector after completing an undergraduate and master’s degree in political science. She was initially working as a researcher before moving up to become a research coordinator.

Fatima did a lot of work on public policy. In her day to day, she would meet with various stakeholders and community groups to convene on initiatives. One of the large, overarching initiatives she was working on was eliminating child poverty across Ontario, a bold and necessary measure.

Around that time, Fatima discovered the Women Learning to Code initiative through the International Development and Relief Foundation. This program offers young women an opportunity to learn more about web development through no-cost training. In the summer of 2018, Fatima went through them to take Lighthouse Labs’ Intro to Web Development part-time course.

While working through the course curriculum, Fatima had a lot of fun on the HTML and CSS parts, but she confesses that the JavaScript module kind of flew over her head. “I didn’t know whether I could see myself doing this kind of work on a daily basis,” reflects Fatima. Nonetheless, Fatima eventually enrolled in Lighthouse Labs’ Web Development Bootcamp.

Fatima’s own experience with attending bootcamp

Despite this competition, Fatima did manage to eventually get hired at a paid internship. A friend of hers who also graduated from bootcamp notified her that her company was hiring, and she started working at LoyaltyOne. She then had her contract extended to April, at which time she’s hoping to transition to a permanent position.

With LoyaltyOne Fatima has been working on web accessibility. She’s been working on making the Air Miles website accessibilities for Canadians to use if they have any disabilities. Her day to day work consists of debugging and refactoring existing code so that it works well with devices like screen readers.

After successfully passing through Lighthouse Labs’ Web Dev Bootcamp, Fatima has some advice for others who are considering enrolling. She knows that bootcamp can be difficult, especially at first. “If you’re feeling uncomfortable, just sit with those feelings,” advises Fatima. “It’ll be okay, and it definitely gets better. But don’t keep your feelings bottled up inside.”

Want to hear more of the great advice and tips Fatima has to offer?