From Research Assistant to Developer, OWN Tech Student Success Story 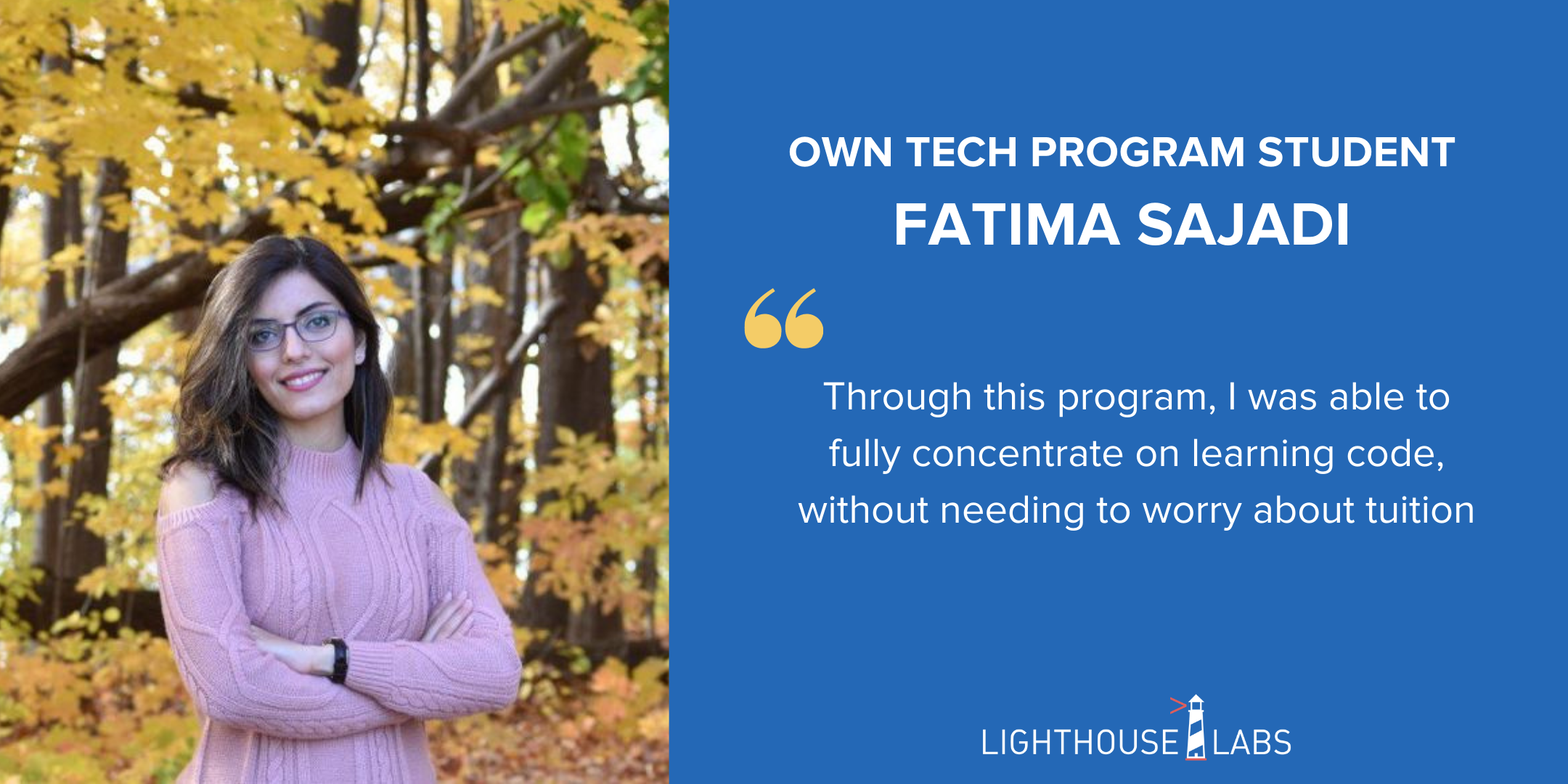 Fatima Sajadi graduated from the OWN Tech program in mid-August as part of the May 2020 cohort. With a Master’s of Science in Computational Chemistry, she worked as a research assistant after moving to Canada. Now, she has the skills and abilities needed to become a full-stack developer. After graduation, she immediately found a position as a software developer at Myplanet.

Fatima is just one of the many women who are empowered through their participation in OWN Tech. This program designed by Lighthouse Labs is a collaborative project in partnership with the Ottawa Chinese Community Service Centre, the CATA Alliance, Riipen, and the Social Planning Council of Ottawa to help newcomer women in Ottawa and Eastern Ontario overcome employment barriers.

The OWN Tech Initiative

Newcomer women can face a wide range of social and economic barriers, and can experience barriers to fulfilling employment. The OWN Tech program was created as a responsive, integrative solution to this problem. Funded jointly by the Government of Canada and the Government of Ontario, this program seeks to empower newcomer women to surpass these barriers, and claim a career that excites them.

By taking part in this initiative, Lighthouse Labs helps sixty newcomer women with backgrounds in IT upskill using a condensed version of our Web Development bootcamp. This provides them with a mixture of technical skills and soft skills that will help them take their career development to the next level.

Fatima’s one of these sixty women. Her interest in web development spans back a few years. “In 2015, I was working on a 3D web-based molecular visualizer,” she reflects, “I’ve been self-learning ever since!” Her self-directed studies weren’t yet yielding a career in tech. She was working at the University of Ottawa as a research assistant when she joined a Lighthouse Labs bootcamp program through the OWN Tech program.

Shortly after graduation, Fatima secured a position as a software developer at Myplanet, a Toronto-based software studio with an international presence. The organization works with businesses through a variety of industries to create multi-interface experiences for their users. The company’s partnered with global corporations like IBM and Google, among others.

How OWN Tech helped Fatima Succeed

After graduating from the OWN Tech program Fatima was able to secure a fulfilling career position. She’s happy with how her education has culminated in a position with a tech agency. “Working with an agency, I have the ability to work on a variety of different projects, and gain extensive experience,” Fatima boasts.

“Through this program, I was able to fully concentrate on learning, without needing to worry about tuition”

The OWN Tech program provides newcomer women with the boost they need to tackle the employment and education barriers they can face. Asked if she has any advice for others who are just beginning their bootcamp journey, Fatima ponders. “If you just keep yourself motivated and do not get discouraged, by the time you are done with the bootcamp, you will realize that solving coding problems is getting easier than ever before,” she advises. “That is so enjoyable and rewarding.”

Want to learn more about how Lighthouse gives back to the community?