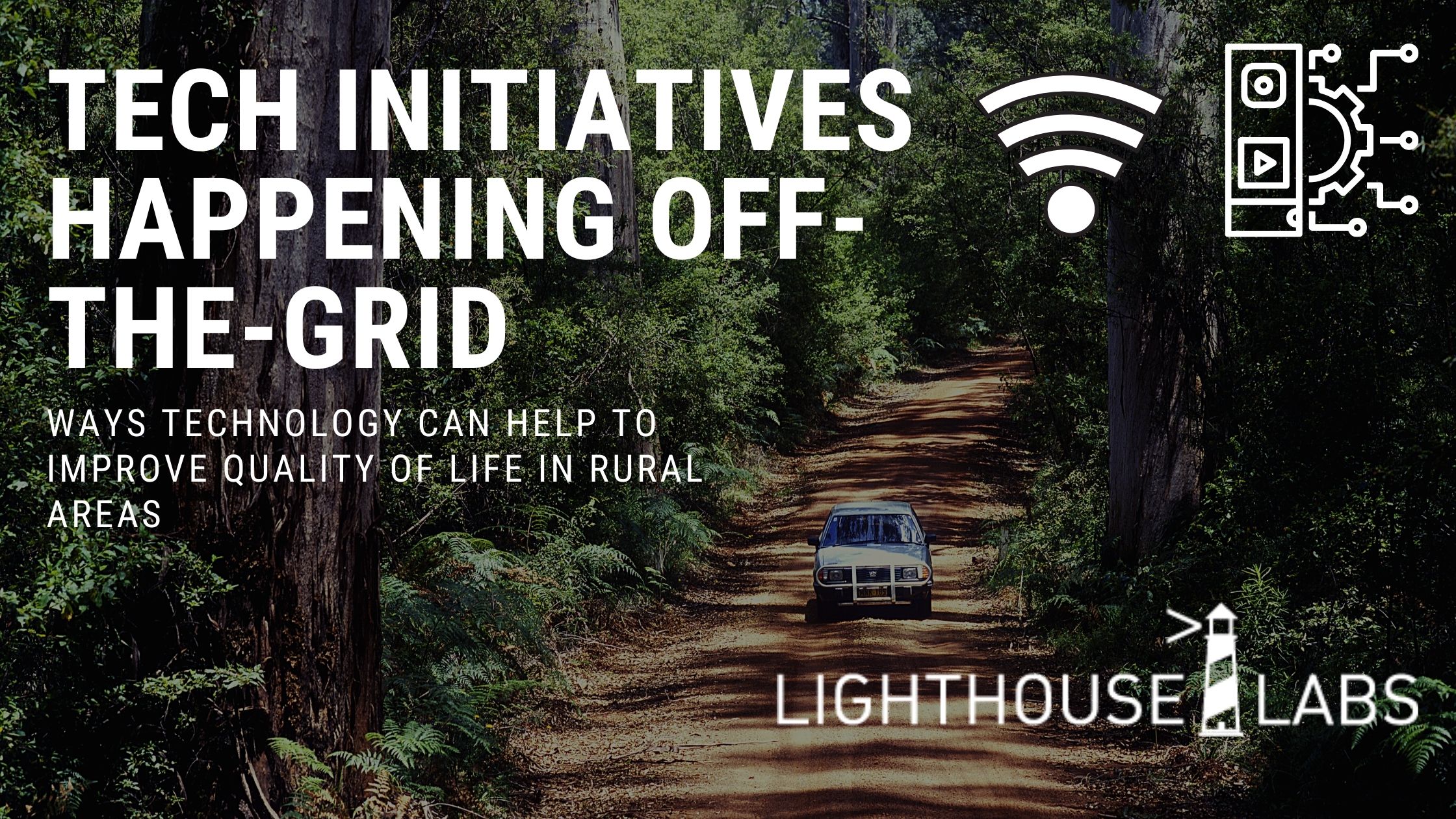 The industrial revolution of the late 1700s and early 1800s heralded a huge migration from rural areas into the cities. Many who had been living relatively isolated, off-the-grid lives decided to take their chances within rapidly expanding urban areas instead. This was because the widespread economic impacts of new industry technologies, like mechanized manufacturing and factories, made urban living much more lucrative.

The digital revolution of the late 20th and early 21st century might seem like a similar movement at first glance. Here in the cities, we have all these technologies at our fingertips: AI, lightning-fast data networks, automation, smart cities. Aren’t rural areas left behind in this?

Though it’s true that living in key metropolitan areas makes it a lot easier to reap the benefits of the digital revolution, it isn’t quite as black and white. Rural areas do take advantage of a lot of the same technologies that urbanites use: the internet, computers, cellular networks. The issue is that there tends to be a bit of a lag between urban and rural. Areas far outside of central cities might have to wait a lot longer for new technologies to reach them in impactful ways.

There are many great initiatives that are seeking to close the technology gap between urban and rural areas. Innovative disruptors and changemakers identify needs in areas further off-the-grid, and look for ways that technology can be used to meet those needs. From education to healthcare to quality of life, there are so many ways that tech can be used to improve conditions outside of cities.

Let’s run through a few initiatives that seek out ways to transform rural living for the better through innovative uses of technology. Here’s a rundown of what we’ll be talking about:

On February 17th, we unveiled the 2021 21-Day Data Challenge. Each day participants have a new opportunity to learn more sweet data science and data analytics skills, like Python, pandas, and Matplotlib fundamentals. This learning journey is accomplished through simple and engaging daily challenges, where you solve problems to progress through a storyline.

The protagonist of the story, Dot, moved to a rural cabin after having a stressful 2020. They want to try their hand at a less urbanized life, but they need some help. You’ll help them solve problems like repairing their humble abode, growing a garden, and buying a cow, by flexing your data skills.

Want to get started solving rural problems with technology? Why not take a test run first while exercising your data science skills?

Solar energy is an incredibly important energy source. It has the potential to offset the impacts of climate change by providing a safe and effective alternative to non-renewable energy sources like fossil fuels.

The problem is, the technology needed to implement solar energy processes can be inaccessible. Especially for less urbanized areas, the infrastructure needed for solar energy might not be readily available. Some organizations are attempting to change that reality.

SolarNow is one such company trying to enact changes in the field of solar energy. They’re using the Internet of Things (IoT) to provide solar energy solutions in rural areas of East Africa.

IoT refers to all the devices connected to the internet, but especially the ways these devices network and share data with each other. Leveraging this within the context of solar energy reduces the need for remote areas to invest in special infrastructure and resources themselves. With SolarNow, they can be managed by a cloud system that uses the IoT.

The usefulness of the internet can’t be overstated. Those of us in urban areas probably take the ubiquitous presence of the internet as a natural facet of life. If our connection blips out for even an hour, we’re left stranded; disconnected from others, unengaged in civic life, and probably unable to complete our work.

But for many living in rural areas, the internet can still be a novelty. They’re afflicted by shoddy connections and outdated infrastructure, if any infrastructure at all. Though we may at times envy these people, who know nothing of the horrors of Twitter feeds, it’s important to recall how useful the internet can be for education, healthcare, and labour.

There’s a major initiative to rehaul rural infrastructure for internet access in China. Using technologies like fiber optics and 4G networks, the government has been steadily widening stable Internet connectivity in the countryside, where nearly 30% of the country’s population resides.

Planning for Hyper Villages in America

Sony’s trying to break down the idea that rural areas are less technologically advanced. With their FutureScapes collaborative project, they’ve long floated innovative, futuristic ideas about how tech can be used. One particularly interesting concept was that of the Hyper Village.

With the Hyper Village, Sony’s FutureScapes hopes for a future where rural locations are able to take advantage of the same great technology that we have in urban areas. They want to help us get to a point where rural areas also benefit from great, technologically advanced infrastructure that improves quality of life.

Improving Internet Access in East Africa With the BRCK

With all these initiatives, you can probably tell what a central problem improving internet access in rural areas is. Making substantial improvements to public infrastructure is an important solution, but it’s incredibly time and resource consuming. In the meantime, there are other smaller initiatives that leverage innovation and creativity.

One of these is from the Kenyan company BRCK, which uses unique tech to bring improved internet access to East Africa. Infrastructure in Kenya can be at times unreliable, especially in rural areas. To counter this, BRCK launched a small, handheld device that functions as a portable hotspot.

With its devices, BRCK is opening up thousands of public hotspots across Kenya. Rural villages are now able to access important resources like educational modules, using BRCK’s hotspots. The company has exploded in growth, raising hopes that it’ll be able to outfit most of Kenya with internet access.

Rural access to healthcare is another significant problem that can be helped by technology. Frequently, rural doctors and clinics simply don’t have the resources or technology they would need to perform advanced tests, like electrocardiographs. The company WeDoctor is attempting to shift this reality in rural China.

WeDoctor is a mobile app that helps doctors make more accurate diagnoses through utilizing artificial intelligence and connection with other professionals. It can also help patients access their health records and speak to medical professionals remotely.

When many rural areas suffer from medical professional shortages, leveraging artificial intelligence to fill the gap is an important, innovative initiative.

Want to get the know-how to start your own innovative tech initiative?