Why I Travelled To Ethiopia To Teach Code 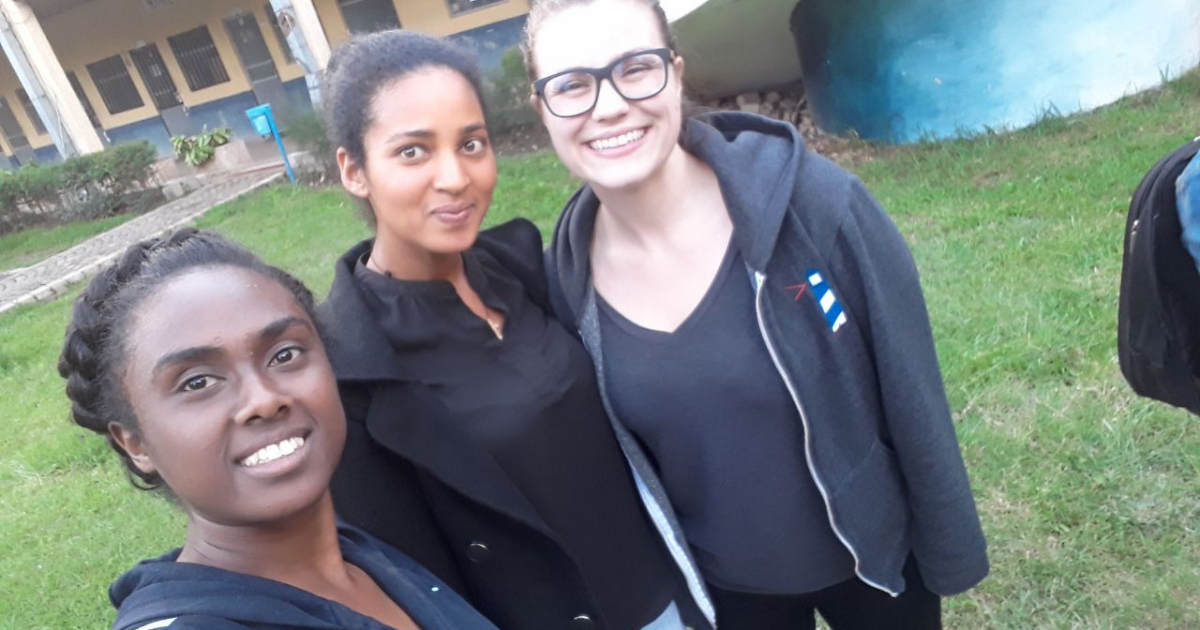 I’m Sadie - a Backend Engineer with Dapper Labs, and an instructor with Lighthouse Labs.

I had a career managing and running training sessions for a restaurant group in the UK. I loved the training side of things but my heart was always in tech, so when I decided to move back to Canada it was a no-brainer to go to Lighthouse Labs. I graduated in May 2018, and started teaching about six months later.

Being visible in this industry is really important to me. When I started teaching, it wasn’t because I was 100% confident in my skills and abilities (let’s face it, does anyone ever feel like this?). It was because A) I felt that I could closely relate to students learning programming concepts for the first time, considering I’d been in that position not long ago and B) There are far fewer women in tech, and even less in senior roles.

When you don’t see someone like you represented in a role, it can be really hard to see yourself in that position or industry and if I can possibly be that representation for someone, that is way more important than indulging in my imposter syndrome. (‘I can’t teach, I barely understand that myself!’, ‘but I’m not senior enough to do that’, ‘I don’t know if I’m ready yet’ - these are all some things I’ve said out loud in the past year).

There are some opportunities in life that seem daunting as hell - and I’ve found those are usually the things that are most worth doing.

Such an opportunity came up when I was offered the chance to go to Ethiopia and volunteer to teach software development to a group of young women.

“The Entoto Tech Fellowship is a fully-funded introduction to software development & entrepreneurship program for young talented women who have demonstrated a passion for computer science and technology but have limited access to the resources.“

You really don’t ever say no to an experience like that. 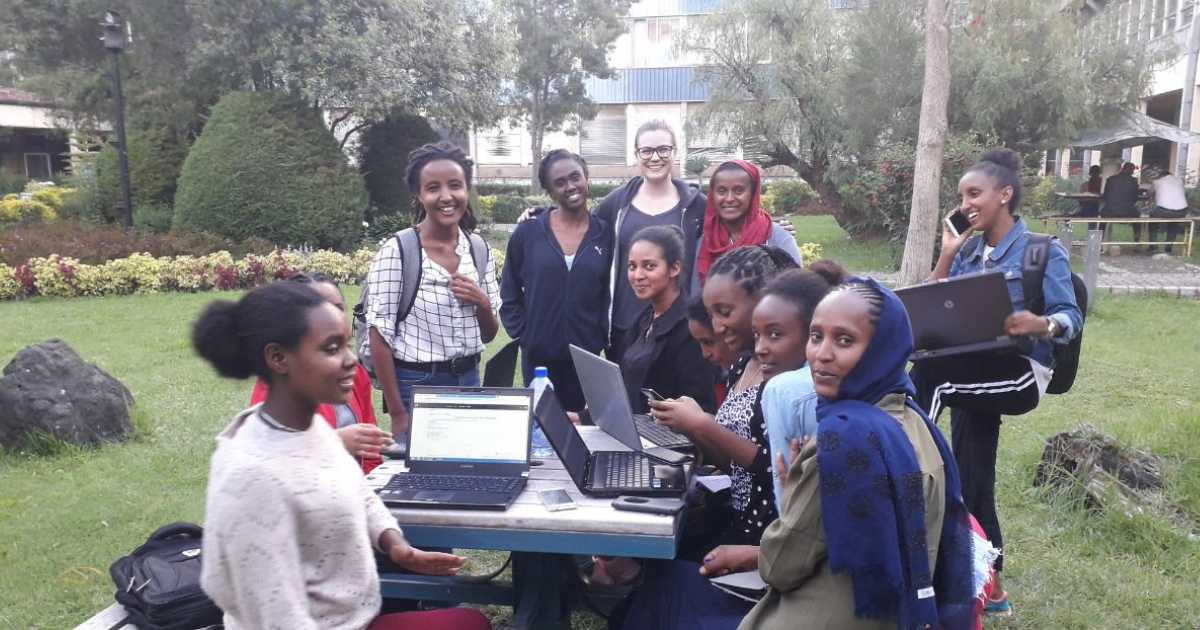 Given that one week I was accepting the position, and the next week I was on a plane to Addis Ababa, I had little time to fully wrap my head around how different it might be from teaching in Vancouver. My first realisation came when I rocked up with my MacBook and quickly realised that I would need to convert all my curriculum notes to be Windows friendly. The Entoto Project had funded for laptops for the women, but they’d been stuck in customs so we had to make do for the first couple weeks with computers at the university - and a few of the women had their own laptops.

The education system in Ethiopia is very different from in Canada. Most of the women in the course had degrees in Computer Science already, but had never really had a lot of practical experience. They told me about how they learned Java and C++ from textbooks and would write their exams with pen and paper. So introducing things like The Command Line, Git, and Code Editors were really new concepts.

The real challenge though came with the internet. The WiFi at the university was spotty at best, and if we needed to download software we’d have to do it a few computers at a time. For the most part, we got it all to work - just slowly.

That is, until the internet was shut down.

It’s become a regular event to turn the internet off in Ethiopia when students write national exams, in order to prevent cheating. That means no WiFi, no mobile data. The only way to communicate is by calling someone. I have to say that the people of Ethiopia dealt with this with far more grace than we would in North America. I can’t even imagine the chaos.

No internet made teaching web development kind of tricky. Not impossible, but not easy. We improvised on a few things - focusing heavily on HTML and CSS (you never realise what you don’t know how to write until you aren’t able to Google it) in the first few days and doing a lot of whiteboarding. There was an hour here or there in the beginning of the week where we had some intermittent internet, so we frantically downloaded all the documentation we could get our hands on. 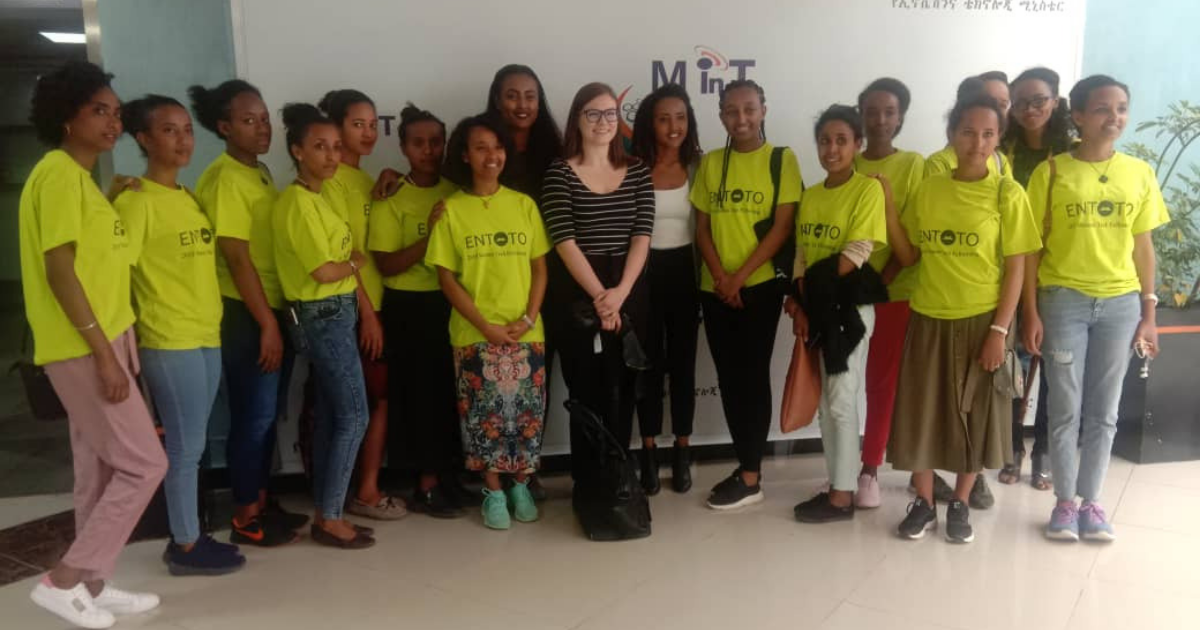 All that being said, dealing with the internet and some tech issues felt like a really small part of the experience as a whole.

On the very first day, one of the women told me that I was the first female software engineer she’d ever met.

The women I taught are honestly some of the most inspiring people I’ve ever met. Despite not having a huge range of practical experience, they picked things up quick. We would see them working off of their laptops (some of them sharing) in the courtyard after the classes for the day. Early on in the week, one of them vocalised something that I think we all feel sometimes: she spoke about how the exercises were hard at first and could be frustrating, but when she finally had a breakthrough she felt like the best software developer in the world.

It’s the best feeling seeing that moment of pride from a student - no matter if they’re in Vancouver or Addis Ababa, but it holds a certain weight when you know this isn’t an opportunity that comes around often.

The program runs for three months in total (the teachers alternate volunteers every couple of weeks) so the students are still learning as I write this. At the end of the program they’ll work on a project to demo to potential employers; some of them are already thinking of what this might be. Some are thinking about apps to help sell Teff online (a grain used to make Ethiopia’s signature bread - injera, which is delicious by the way), or other apps to help solve problems that Ethiopians face every day.

Volunteering doesn’t have to be as big as flying to another country, although if you do ever get the chance to do so I would highly recommend it. I learned so much about Ethiopia and was fully immersed into their culture for the weeks that I was there. It’s a fascinating and humbling experience.

Volunteering and teaching makes me a better developer. There’s no way better to learn something than to teach it, and if you can teach it in a way that clicks with someone, I promise you there’s nothing more rewarding than seeing the look on their faces when they make something work for the first time.

You’re never ‘too inexperienced’ to help someone else. There are so many opportunities - from mentoring with Canada Learning Code or you could even be a remote mentor for the Entoto Project. GoAbroad has a search tool for checking out volunteering opportunities.