Data Grad on His Post-Bootcamp Career 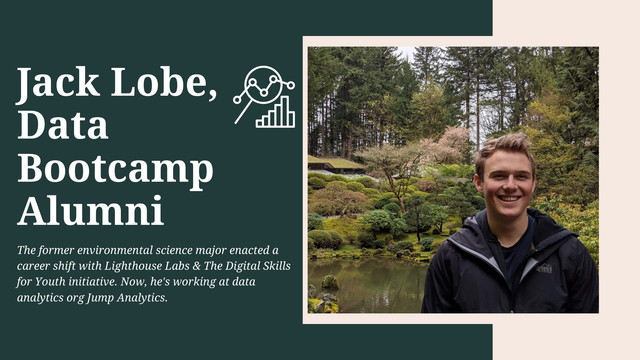 Jack Lobe is one of Lighthouse Labs’ graduates from our Data Science Bootcamp. Jack came to Lighthouse almost directly from his university studies, a bit unsure about what he wanted to do within his career. After training in our accelerated, outcomes-obsessed data science program, he headed straight into a career in data.

Jack is also one of our students that’s benefitted from our Impact Initiatives. The Digital Skills for Youth Program helps to connect underemployed post-secondary graduates with employment opportunities, helping to finance youth wages for the first six months of their employment. This project is funded in part by the Government of Canada.

Read on to learn more about Jack Lobe’s career trajectory, and how he was able to make a career shift with Lighthouse’s digital skills training.

From Environmental Science to Data Analysis

Initially, Jack was studying something markedly different than data: environmental science. At the University of British Columbia, he did his readings and sat in lectures about the natural world around us. But over the course of his degree, something stopped clicking for him. “When I started, I felt like I knew why I was studying environmental science. But by the time I finished, I didn't really know anymore,” Jack confesses.

Part of the issue was the long educational journey in front of him. Towards the end of his degree, it began to be clear to him that if he wanted a job in the field, he would have to attain a much higher level of education. Expending that much labour and money towards the discipline was off-putting to him, especially because he wasn’t exactly thrilled with the subject any longer.

A possibility reared its head with data science. While working on a capstone project during his final university year, he was obliged to learn a bit of Python. “I was making a climate model for Burns Bog in B.C.,” Jack recalls. “I had to use Python, so I connected with a professor who mentored me a bit. It was an introduction to the googling side of coding.” That being said, Jack admits that he didn’t know very much about data science at first. Not until he was introduced to Lighthouse.

After graduating from university, Jack fret about what path he was going to take career-wise. He made some travel plans, but the COVID-19 pandemic swooped in and washed them away. Instead, he was referred to Lighthouse Labs by a friend who had hired some graduates as software developers. He had his admissions interviews in the spring, and graduated from bootcamp the following fall.

“Bootcamp was intense,” Jack remembers. “But by the third week, you're used to sitting down in front of the computer all day. It becomes natural.” He recalls being surprised by how he was able to make friends within his cohort, despite the remote education platform. Because of the high intensity of bootcamp, communication between classmates is essentially a necessity. This can quickly develop into strong bonds. “In the end, at the friends and family part of Demo Day we just hung out together in each other’s presentation rooms. I think if COVID wasn’t going on, we probably would have met up. We were all pretty close by the end of it,” says Jack.

Jack notes that in terms of content, most of what he learned ended up being applicable to what he needed to get a job. He describes how great his instructors were, which contributed to his overall positive experience. “Despite the rigorous schedule, it was actually quite fun. It wasn’t hard, and I felt like everything was within reach,” says Jack.

Launching off Demo Day into a Bright Future

The end of his studies was Demo Day, where graduating students present the capstone project they’ve been working on. When graduating, Jack’s project was a spatial-temporal model of transit startup demand within Dallas, Texas. Within the project, Jack was able to forecast rideshare demand over a year-long period. “I didn’t want to use a premade dataset, because you don’t work with that type of data in real life,” Jack says. “I happened to know people that could get me the data, so I got lucky with the opportunity to work on such a good final project.”

After passing through Demo Day, Jack interviewed with several companies and received job offers from three different employers. He ended up taking a job as a data scientist with Jump Analytics, an organization providing analytics to other companies in manufacturing, oil and gas, and retail industries, among others. “The job seemed like the best option for me,” Jack recounts. “I don’t know where I’d be without the Digital Skills for Youth program, which helped finance my employment.”

Where will Jack go from here? He discusses how his hope for the future is just to keep improving in his craft. “I want to keep building up my experience. In this field, everyone’s constantly evolving in some way. What you think you know about data science is very little compared to what’s out there. So I want to expand as much as I can in any direction possible.”

Interested in accelerating your career possibilities with data education?