A Shopify Dev & Mentor on Mentorship 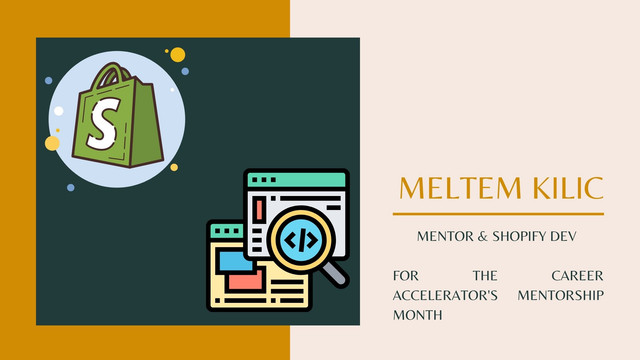 Meltem Kilic is one of our amazing mentors at Lighthouse Labs that helps to guide students through the web development bootcamp. As a part of the mentor team, Meltem is an essential piece of how we do education at Lighthouse.

Of course students are taught and coached by expert instructors, but mentors are the other important part of this. Mentors work alongside instructors to ensure students are being trained for their careers in a far-reaching and profound way.

Lighthouse’s acknowledgement of the importance of mentors is a bit more formal than usual. Almost every worker in almost every field is guided or coached by mentors at some point in their career, but this labour is sometimes not visible.

Mentorship takes many forms, whether it’s done by a more senior colleague, a peer in the same field, or an instructor that went the extra mile. It’s likely that you’ve been mentored by many different people through your career or careers.

Lighthouse makes the structure of mentorship more explicit by assigning official mentors to our student cohorts. In an effort to open up conversations about mentorship, and share gratitude towards our mentors, our Career Accelerator initiative has dedicated the month of January as Mentorship Month. All month, we’re sharing and exchanging stories about our mentors.

Meltem Kilic is one of the mentors that’s joining in on these conversations. She spoke to us about her own career trajectory, her style of mentorship, and how she got involved with mentoring. Read on to learn more about one of our great mentors:

From Chemical Engineering to Front-End Development

Originally, Meltem’s education was unrelated to coding. She completed an undergrad in Turkey at Istanbul Technical University, before going on to complete a master’s in Quebec in chemical engineering. Her travels from Turkey to Canada kind of happened circumstantially.

“When I was finishing my undergrad, my supervisor brought to my attention some research grants that would allow me to study abroad. I wasn’t sure about what I wanted to do, but I wanted to study abroad,” says Meltem. Of everywhere in the wide world, why Quebec specifically? She was excited about the prospect of learning French in a multilingual environment.

After graduating with her master’s, she began looking for employment while still feeling unsure about what she was doing. “I never felt super passionate about chemical engineering, I chose the subject when I was 18,” says Meltem. The fact that she remained in the field while feeling unsure had a lot to do with her environment. She discusses how it’s difficult to change your study subjects in Turkey.

In addition, computer science was very male-dominated. “I didn’t really consider computer science to be something that women did. There weren’t women around me in that profession, but there were a lot in chemical engineering,” Meltem says about her studies.

That changed after she moved to Canada, when she started to meet people for whom making career changes was more common. Switching into web development started to seem like more of an option for her.

“I wanted to build digital things, and programming sparked my interest more than all my chemical engineering studies,” Meltem reflects. Others who had made big career changes advised her that this switch could be a good option for her, not least because she would be able to leverage her engineering background.

She started to look more into web development, learning online about HTML, CSS, and JavaScript, and attending coding meetups in Toronto. Finally, she was introduced to Lighthouse Labs’ bootcamps.

Transitioning into a Career as a Shopify Developer

After graduating from a web development bootcamp, Meltem immediately got a job as a front-end developer in a small startup. “I was one of just three people. My boss was a really experienced dev, and helped to mentor me a bit,” Meltem recalls. Some months later, she moved on in her career by accepting a position at Rangle.io, where she worked for about two years as a dev.

She remembers her time at Rangle.io as a great experience. “Rangle.io was such a well-known company in Toronto,” says Meltem. “It was a really fun and focused position.” Finally, she left Rangle.io to begin working at Shopify in September of 2020. At Shopify she’s one of the devs working on Shop, the company’s consumer-facing application.

Beginning a new job in the middle of the pandemic isn’t the easiest thing. Meltem talks about how she’s managed to adjust to the realities of remote work at a new position. “I try to wake up early and build a routine that I stick to every day,” says Meltem. The daily workflow is a lot of individual deep-work interspersed with select meetings.

Meltem starts the day with a list of things she wants to accomplish, spends the mornings doing highly-focused work alone, and attends team syncs once a day in the afternoon. “When I’m working alone, it’s hands-on, but it can also be spending a lot of time reading and learning,” Meltem says.

Sharing Her Knowledge Through Mentorship

After a couple of years learning and working in front-end development, Meltem decided it was time to start mentoring. This move was out of a desire to give back and try being on the other side, as well as to increase her own knowledge.

“I wanted to help out students in the same way that my mentors helped me, but I also wanted to solidify my own knowledge. Mentoring is helping people, but it’s also pushing yourself to be better,” says Meltem.

She started mentoring by volunteering at the Ladies Learning to Code organization. Eventually, she began to feel comfortable and confident enough to mentor with Lighthouse. She found it nice to reconnect with the school after leaving it for a couple of years.

When she began mentoring, she hadn’t really nailed down her style yet. But she spent a lot of time thinking about the mentors that she liked while she was a student, and what their styles were like. Now, she knows how to engage with her students in a way that’s productive and helpful.

“When I’m mentoring I try to guide the student to find the solution themselves, instead of giving it directly to them. It depends, because sometimes students are really frustrated and just need to be given the answer, when they’ve been trying to figure it out for hours. So I gauge where they’re at,” Meltem says.

Sharing resources is an important part of being a mentor. Meltem spends time assessing where her mentees are at, and then sending them articles and posts around the concepts they’re struggling with. “Sometimes I don’t know the answer myself, so I sit down with them and we work on the problem together,” Meltem smiles.

Because she’s a person that’s been in their shoes previously, she can help them feel better about their struggles by sharing her own experiences with them. This is the power of having more experienced peer mentors in your industry.

Want to get more excellent advice about concepts like mentorship and career-changing?