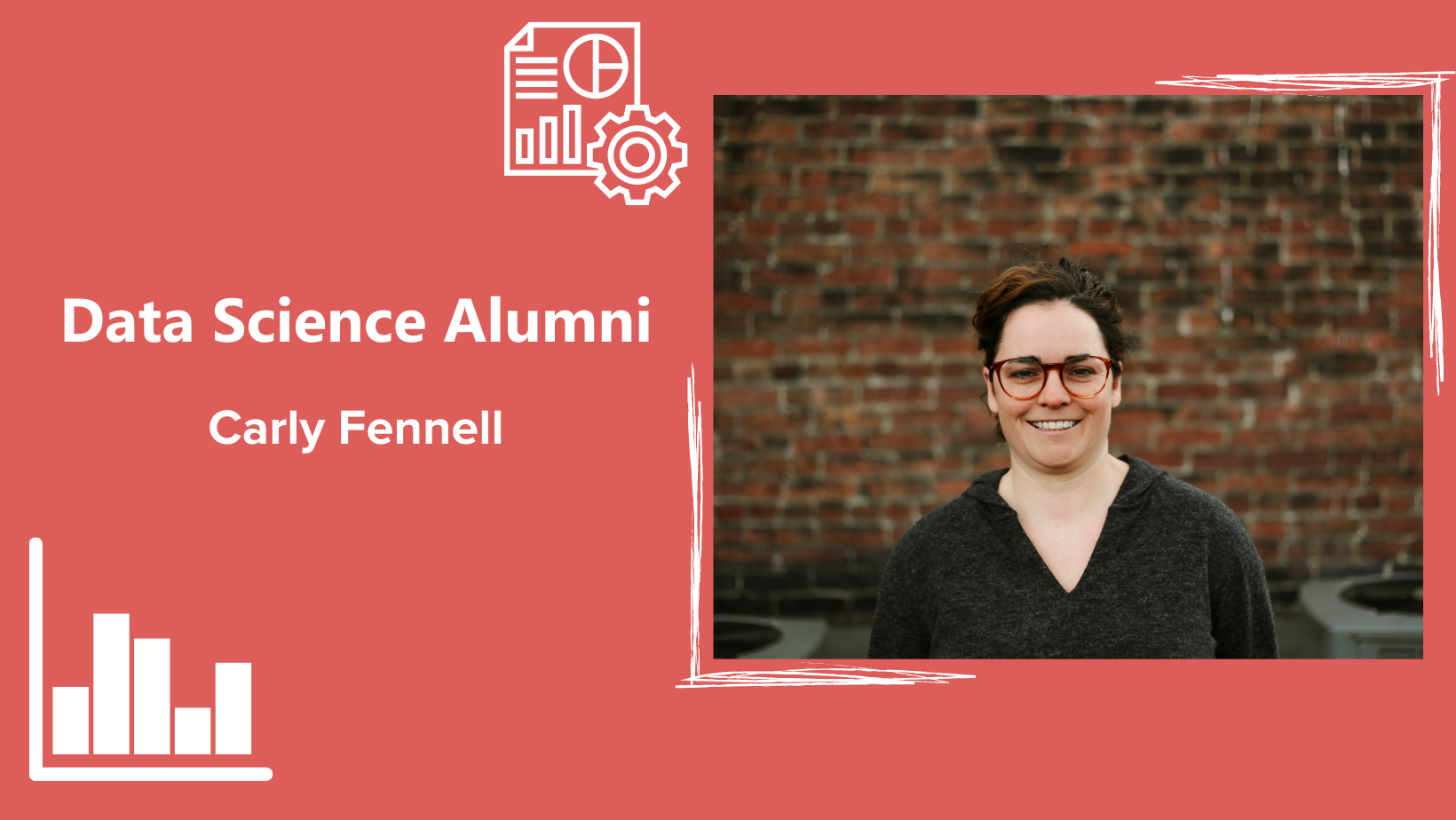 The relevance of data science skills to a career goes beyond traditional roles like data analysts and data scientists. Because of the increased digitization of practically every industry, and the explosion of available data, being well-versed in data can be a lucrative skill for nearly everyone.

One of our Data Science Bootcamp graduates, Carly Fennell, proves the wide applicability of data skills. Carly spent several years working in biomechanical engineering, but she found that without advanced knowledge in data science, she was unable to progress in her career the way she wanted to. Enter Lighthouse Labs’ bootcamp.

Carly sat down virtually to speak with us about biomechanics, data science, attending bootcamp as a parent of a young child, and major league soccer. Read on to find out what it’s like to attend our Data Science Bootcamp.

What was your background before registering in bootcamp?

My husband and I had come out to Vancouver when we were a bit younger for eight months, and we just fell in love with the city. When I was working at the university back in Ontario, I was scouring Vancouver’s startup scene to see if there were any relevant positions or companies in the biomechanic product development space. I stumbled across a footwear startup called Wiivv (now called Fitmyfoot) and reached out to them, and began working there. I've always been interested in footwear. It was a pipe dream that I wanted to work at Nike as a biomechanics footwear developer. So this was a really unique opportunity for me, and I jumped at it.

I’d been working there for five years before I started looking for data science bootcamps. At Fitmyfoot I directed a team of engineers to come up with insights on how to direct product design decisions. Oftentimes, they were really complicated problems related to human biomechanics. I found that I was really good at distilling information down from small datasets, but once the data kind of got bigger I needed members of my team to help me with things like Python and statistical analyses. I felt I was limiting myself by not being able to work more creatively with the solutions. So I left that company in order to do the bootcamp, actually. It was a bit risky — but with the pandemic, it seemed like a good time to take a risk. The main driver was feeling hampered by my own technical skills. That made me think I wasn't delivering at the level that I could, with all the other experience and knowledge that I was bringing to the table.

What was it like to shift your life completely and dive into bootcamp?

The bootcamp was extremely intense. I'm a relatively new mom — my son is a year and a half right now. Juggling that was very strenuous. Prospective students have reached out to me to ask about my experience, and I'm never shy about saying that it's really 12 hours a day, five to six days a week. The intensity was hard for me, but I just made a commitment that over the three months, the bootcamp was going to be my main objective. And it was amazing. The online delivery was great — they did a really good job having mentors and lectures available for many hours of the day and six days a week, which really helped to facilitate learning.

I felt really close with my cohort mates, even though we were doing it remotely. Every day there's a lecture, there’s problems to solve, and you hop on calls with other people who are struggling and trying to work through it. Everyone's in the same boat together, which I found very nice.

There was one other parent in the program, and we connected right away because of that. He was in a different scenario, because he had two girls and a baby on the way, and they were quite a bit older. So more demanding of attention. We were both relying heavily on our partners.

What did you think of the material covered in bootcamp?

The content itself was unreal. I came into the program knowing some Python and having done some self-learning on Python and machine learning before. I took some Coursera courses on data science. I also found the prep modules Lighthouse has were very good as well, which all got me up to the level they expected for programming. From day one of the 12 week program, you're learning to code. By the end of it, coding was absolutely no problem. Being able to look at a problem and fix it with code was exactly what I was looking for.

The curriculum covers most major machine learning techniques, along with deep learning, data wrangling, data cleaning, and more. So there's a huge amount of material, which is why it was so intense. The lectures had so much knowledge and information, and after the lectures instructors were frequently available to answer questions.

How did bootcamp compare with your experiences at university?

I loved my experiences at university, but the courses there were quite a bit less innovative than what Lighthouse puts together. Lighthouse is really disrupting the education industry with their programs. I found their approaches really innovative, especially in adjusting to a pandemic. With remote learning, they had to maintain the same level of connection between the students and the material. The content was just as good as a university course, but the delivery was more intense because of the condensed timeline.

What did you do for your final project?

For my capstone data science project, I worked with a major league soccer team to better understand player performance and opponent strategy. I implemented a pitch control model, which predicted the probability of possession of the ball by either team for every second of the game, based on tracking data of the players and the ball. I was able to work with the data science team of the major league soccer team. It was really interesting to see the kinds of problems and opportunities that data science can be used on at a professional level.

How did the program prepare you for your job search?

During the bootcamp I attended all the Career Services workshops, which went over topics like creating resumes, interview styles and skills, networking, and building cover letters. I found that helpful, because I hadn’t been doing a lot of interviewing for quite some time.

How has your career progressed since graduation?

After graduation, I started my own consulting. I have three different contracts going currently. I would prefer to work with one company most of the time, and perhaps continue consulting on the side. The consulting I’m doing is related to data science, so it directly applies the skills and knowledge I gained from the bootcamp.

For my long-term goals, I’d like to consult companies on strategy around going more digital, and integrating machine learning and deep learning into their existing pipeline. One thing that the COVID-19 pandemic has shown is that everyone’s willing to innovate. It was a really extreme push that people needed to start innovating. Now in fields like education, healthcare, and medicine, things are going more digital. And with going digital, there’s a lot of data involved. I'd like to be the person that a company would approach to help them build a strategy on going digital.

What advice would you give to someone who's thinking of enrolling in bootcamp?

Going into the program was really worth it as an investment in myself. And the value that students get from the program is pretty astounding in terms of the content. It was an unreal investment in my own skills. It was very liberating to learn these things that I knew would be helpful in my career, and then actually put them into practice. I would encourage prospective students to think about their goals and themselves, and weigh them with the value they’ll get from the bootcamp.

Ready to invest in yourself and your future?